skip to main | skip to sidebar

Deleted
Runtime Approx. 2 Hours 20 Minutes (123MB) 128kbps
Los Angeles Radio
KROQ 03/04/79 Rodney Bingenheimer w/Kim Fowley
What can I say except this show is great!
Rodney has Kim Fowley as his guest. Kim Fowley brings along Australian actress Sue Smithers into the studio with him and an assortment of records from down under. Lots of local phone in questions. Holly of Holly and the Italians stops by to plug her new record. Unfortunately I don't have the entire show.

This tape begins with Chuck Randall's sign-off, then right into a must-hear Rodney On The ROQs show with his excentric guest; Kim Fowley. These 2 Hollywood debaucherites are responsible for the decline of American Civilization... Peace!

Rodney mentions it being a Sunday night and Sue Smithers reads the list of upcoming Whisky-A-Go-Go shows beginning with Monday, March 5.

Also, "The Great Rock 'N' Roll Swindle" was released March 2, 1979, according to its Wikipedia page which means that it had only been available for sale for 2 days at the time Rodney began playing parts of it on the air.

Thanks again MykeC. I just updated the title of this post.
riff

You're welcome. It's nice to be a positive influence with your effort.

thanks alot!!!
just found your site its great

This tape is nearly impossible to index completely and accurately as Rodney allows Kim Fowley to play a lot of his own records by obscure Australian punk bands. Kim did a poor job of citing the artist names and song titles played and even gives deliberately incorrect artist names and titles on occasion for laughs. So with that being said, I'll leave it to someone else to correct any mistakes and/or fill in the blanks:

Awesome aircheck! Always interesting when Rodney and Fowley get together. This one is definitely worth a listen! It's best to begin when Fowley arrives after the Dickies set.

I wonder if Sue Smithers ever did that session with Kim? Seems she is back in Australia and in the past decade, has released a couple of CDs containing jazz standards.

I haven't listened to it yet, but thanks for uploading. I know it's been a while. I'm glad the file is still there. I've only listened to Rodney now and then since '98, so I'm excited to hear this. 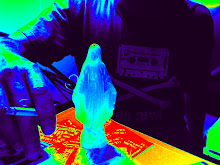